Asgardia’s First Parliament session took place on June 24, 2018 in Vienna, Austria. 108 Parliament members from all over the world elected from Asgardia’s 13 Districts attended the sitting. It was a truly memorable day not only for the Parliament members who were there but for all the Asgardians delighted to celebrate the appointment of Asgardia’s Supreme Justice and the adoption of a number of legal acts and policies.  This event was a good way to see how well Asgardia’s democracy works

A year ago, Mr. Yun Zhao was appointed Asgardia’s Supreme Justice. Ms. Ana Mercedes Díaz assumed the responsibilities of an acting Prime Minister. Two laws were reviewed and adopted: the Act on the Enactment of Legislative Acts of the Nation of Asgardia and the Citizenship Law. Once the impressive Parliament session was closed, Mr. Lembit Öpik was elected Chair of Parliament. 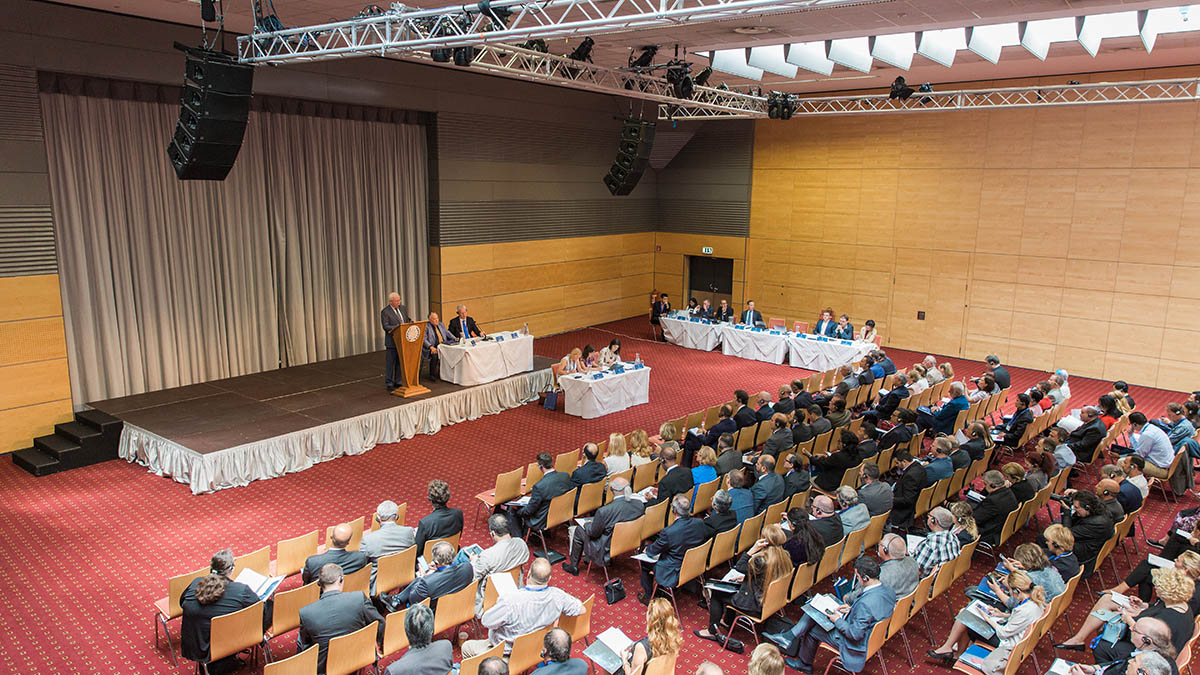 Currently, Asgardia’s Parliament has 150 members directly representing Asgardia’s citizens around the globe. The Parliament consists of 12 committees with a range of responsibilities matching the state ministries’ one.

To celebrate the first Parliament session anniversary, Asgardia’s Parliament members shared their memories and talked about their expectations related to the next sitting:

“It has been a year of growth and infrastructure building.  Many hard-working and dedicated individuals have bonded together in a unique and powerful global collaboration for the progress and benefit of all Asgardia. Growth and precedent building in government structure and interrelationships are the two areas that have defined this first year. I am honored to count my fellow parliamentarians as dear friends and colleagues and look forward to the next year with enthusiasm.”

“It was a once in a lifetime extremely emotional experience and with great expectational and suspense excitement. Something amazing happened in that very long day first session of the First Parliamentary sitting, I witnessed a very professional session! I learned a lot that day! I said to myself, this is a treasure: A Magistral session on how to lead a Global Parliamentarian Team. Something that You won't learn in any university in the world!

That impression of seeing a great global team working with great emotions, expectations and professional standing lasted on my mind until now. Asgardia Parliament became an example to the whole world that if We learn to work together with values, honesty, and professionalism, We are capable of high achievements. I hope We can repeat that experience again in the near future.

Asgardia is in the process of increasing global momentum having consolidated its pillars of independent powers: Government, Parliament and Justice. We have worked hard for a year to achieve this important milestone. It is very rewarding to work with global professionals, leaders in its field of expertise. Is a treasure that You won’t experience in other organizations and that our global Government has to be aware.

Having reached an Asgardian Global network of 1 million people is something that We should be proud of. We have to keep injecting ENERGY and MOMENTUM into the global organization to scale it to a 150 million global network structure in order to guarantee the auto sustaining and scaling of Global Asgardia Aerospace operation.

The Consolidation of Asgardia Manufacturing Committee MC formed by great professionals is a great achievement because We will help Asgardia increase its global financial momentum that will guarantee the success of Asgardia mission projecting our civilization to space.”

“The first Parliament of Asgardia with virtual meetings shows how the concept of virtual nation has developed. There are still phases of adjustment but everything proceeds with order. Next year will be the year of growth and development under the guidance of the national Parliament. There is consistency and discussion among the members of Parliament in the objectives to be achieved. A unique and exciting experience and in a few years concrete results will come.”

“An exciting moment with the great possibility of laying the foundations of a nation all together with the thought of a global goal. In short, I was happy to become part of Asgardia, a dream that was concrete and made visible at that time. It was indescribable the gratifying feeling of seeing face to face all the colleagues with whom we were working only through the internet.

We have formed committees and in them we have discovered our talents to articulate joint actions. We have voted laws that have strengthened our step to become a Nation. Our conversations among parliamentarians have enriched our passage through time and we have recognized exceptional values and qualities in many of them.”

Mr. John Fine, Chairman of the Trade and Commerce Committee

“This was a pivotal moment within my life, before this session I had not fully brought into the Asgardia dream, I still had many doubts.  However, after this session I became a fully-fledged Asgardian, and knew I had a purpose in time to give of myself where needed in helping Asgardia reach its goals and objectives.  I had so much fun meeting new friendships, participating in the voting of our very first laws.  A truly momentous occasion that serves as a reminder of how important this project is.  Never in my life had I received such respect and attention, our honorable HON and his team, went all out to make us all welcomed and appreciated.  It was truly history in the making.  A big achievement within itself for all of Asgardia.

Our next major milestone will be the priority legislation initiative.  This initiative will set priority laws into motion that will allow our governing bodies the tools they need to keep the momentum of success within their reach.  It is a true honor to be a part of the processes that will create the laws that will remain a part of history for Asgardia, and I am certainly looking forward to our next annual Parliament sitting.”

“I arrived in Vienna a skeptic, uncertain about what I was getting myself into. During this event, I met such an amazing group of people with such remarkable talents, I truly believe that together we can accomplish almost anything. I brought my family to participate in such an historic event.  When I saw how graciously we were treated, I knew that this was a group with the right hearts and minds to change the future for our children as we embark on this amazing journey into space.

In governments, it is easy to be wary of the system and assume the worst potential intentions and hidden agendas.  In Asgardia, I am amazed at how trustworthy and collaborative the people are when working toward these common goals.  I believe that everyone in the political arena could learn a little something from our new nation and the respectful, open-minded and cooperative balance we have built together.”

“It was an honor to be a part of History in the First Formal Setting Of the Asgardian Parliament, and the acceptance of Asgardia's first Laws' And the Voting of the First Head of Nation.

The second is to the achievements of many of our committee members and ministry's who have attended The UN, Trade shows and has been invited to share what Asgardia is about to other governments and universities in other nations.”

“The first Parliament session can be best described as “e pluribus unum” - “out of many, one.”  The spirit of cooperation and dignity share among Parliamentarians exemplified “One Humanity, One Unity.”

I was amazed that so many people from all over the globe and from different cultures came together to work for the betterment and future of humanity. We were very successful and laid the foundation and building blocks for what I call Humanity 2.0. History will mark this session as the first time men and women came together to shape a future of humanity that created true freedom and equality, knowledge for all and opening the space to all humanity.

The biggest change that has occurred is most certainly the completion of the formation of our government with the appointment of all ministers at the Executive Congress in April.  This enabled the government, Head-of-Nation, Parliament and Ministers, to competently move forward with solving the urgent and immediate problems facing the nation such as creating an economy. As a member of the Citizenship’s committee, I have authored a Citizens’ Bill of Right and have collaborated with many Parliamentarians to refine the proposal. I plan to release it for signatures well before our next physical meeting of Parliament in October.”

“The first sitting surprised me with the excellent, friendly and fully cooperative mood among people from all over the world that had never met before. I remember, we, MPs, had to meet for the first time in person with the established administration of Asgardia. The sitting has been an amazing confrontation among those two components, and I believe we managed very well to find an equilibrium. It was an experiment under so many points of view, and I think we managed to push the experiment further, as is evident today.

The most important change during the last year has been the formation of the Government, that marked the transition between the initial, mostly theoretical approach, and the action we are experiencing right now, when things are being done at the planetary level.

Another big difference is that the Parliament has now a clearer idea on how to operate, and this is making our work smoother.”