Key members of the First Space Nation assembled today in the heart of Vienna to attend First Asgardia Executive Congress. While the Ministers have been in collaboration remotely, using a range of digital technologies, this is the first time they will come together to meet and work in person

The first day of the Congress was opened by Head of Nation Dr. Igor Ashurbeyli. In his welcome note, he recalled the achievements of Asgardia over its 2,5 years, and listed the Congress' immediate tasks: complete the formation of the Asgardian Government, swear in the supreme leaders of the State, and lay the foundation for Asgardia's development program that will be adopted by the Supreme Space Council.

“I am confident that such congresses will become traditional and annual for us,” said the Head of Nation. Then, panel sessions began.

Day 1 will include 12 presentations by areas, starting with security, and finishing with science and culture. Each report is presented jointly by two branches of the Asgardian Government: Ministers and Chairs of the respective Parliamentary Committees. The first presentation was on security.

“Our mission is to ensure that Asgardian citizens, organisations and enterprises, be they earth-side or space-side, thrive in an environment of great freedom, in which the risks to safety and threats to security are reduced to the point that they become negligible”,  -  said Minister of Safety and Security Philip Appleby. 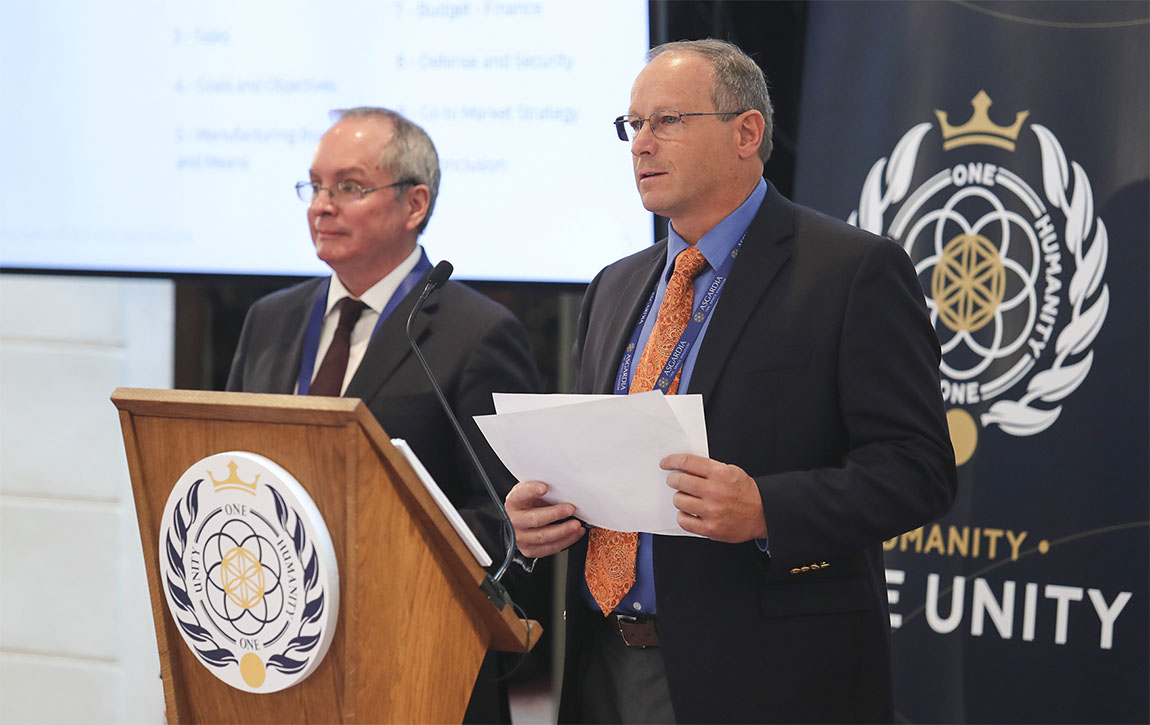 Fernando Himenez Motte, Chair of Manufacturing Commitee (left) and Stephane Caiveau, Minister of Trade and  Commerce stated that Asgardia is becoming one of the largest players in space exploration field

The Congress participants displayed a particular interest to the report on manufacturing.

“Asgardia is to become one of the largest players in space exploration by creating a profitable enterprise, with ambitious goals like deployment of satellite constellations on low earth orbit to provide internet to everyone on earth, creation of lunar settlements with habitable moon-bases with production facilities and hydroponic farms, or putting robots on Mars before Asgardian explorers to build comfortable structures with 3D printers, using Martian soil and other additives,” - said Stephane Caiveau, the Minister of Manufacturing.

The First Asgardia Executive Congress will last 3 days, in which the Ministers of the Government are expected to be officially sworn into office in an accreditation ceremony that will be attended by key officials of Asgardia, including the Head of Nation Dr. Igor Ashurbeyli.

In the meantime, Asgardian Members of Parliament from all over the world spanning 24 time zones will also be connecting live via video-conferencing software to conduct the 3rd Digital Sitting of the Parliament.