Head of the Nation Opens Economic Forum in France

The First Economic Forum of Asgardia launched today in Nice. The Forum is devoted to generating ideas and solutions to help develop a financial system for the First Space Nation. Head of the Nation, Igor Ashurbeyli, opened the forum with a speech that outlined his personal vision and hopes for an economic model built on two main pillars that will put the people first.

Head of the Nation's Opening Speech 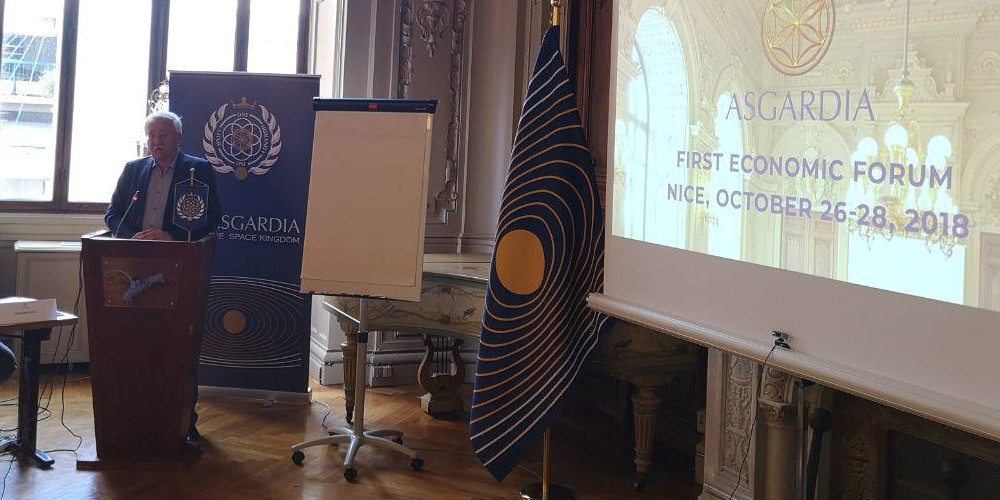 First of all, I’d like to thank you for finding the opportunity to travel here from different countries to participate in today’s event.

This is the First Economic Forum in the history of Asgardia.

The following categories of participants are present:

1.  The speakers – those who presented their concepts of the economic system of Asgardia and its currency, and have passed the according selection
2. Experts, whom we invited to provide analysis of the concepts presented.
3.  Special guests.
4.  Members of my Administration

Now I would like to briefly go over the main postulates of my personal macro-vision of the economic system of Asgardia as a whole, and its currency in particular. Not as a professional economist, but as a visionary and the Head of Nation.

Obviously, while preparing your presentations, you, the speakers, were not aware of this,  and now  it’s too late to change anything in your presentations. But maybe it’s for the best, since you had the full freedom to be creative. And we won’t make any final decisions based on the outcome of this Forum. We have a long journey, and this is not our last economic forum.

Now, an economy is the basis for the Nation’s power. That’s a banality.

An economy has an ideological and a financial component.

The ideological component of Asgardia’s economy is based on two pillars.

The first: In today’s world, the right of money ownership belongs to governments, and citizens are hostages of unsecured fiat and digital currencies. In Asgardia, citizens must become owners of the monetary system. The government is simply a middleman, broker and guarantor of monetary transactions.

The second: In no earthly nation are the citizens the recipients of the government budget surplus. But they always bear the brunt of the deficit. In Asgardia, every citizen must be a participant in the distribution of the Nation’s profit.

The financial component of Asgardia’s economy is based upon its two national currencies.

First, the Solar. A solar currency. The sun shines for all on Earth. That is why the Solar must become a universal payment currency converted on the exchanges into not just hard currencies that exist in earthly nations, but also into legitimate cryptocurrencies.

Second, the Lunar. A lunar, exclusive currency. Just for the citizens of Asgardia, 2% of the Earth’s population. The Lunar is an internal financial and monetary asset that confirms the citizenship of Asgardia. As any asset, it is subject to exchanges, sales, loans, gifting, inheritance and more. It is also listed on the exchanges.

I will purposely not say more because, in the framework of this very general strategy, it is important to me to give all Asgardians an opportunity for co-creation in the development of the economic system of Asgardia.

Based on the results of the first economic forum, the following is planned:

2. Publication of the reports and presentations of the forum participants as a supplement to ROOM: A Space Journal and on Asgardia’s website.