It has been an extremely productive year for Asgardia: major accomplishments were made, new goals set, amazing historic event held. Let’s take a look at these 10 great steps the First Space Nation took this year, and see the progress we’ve made so far 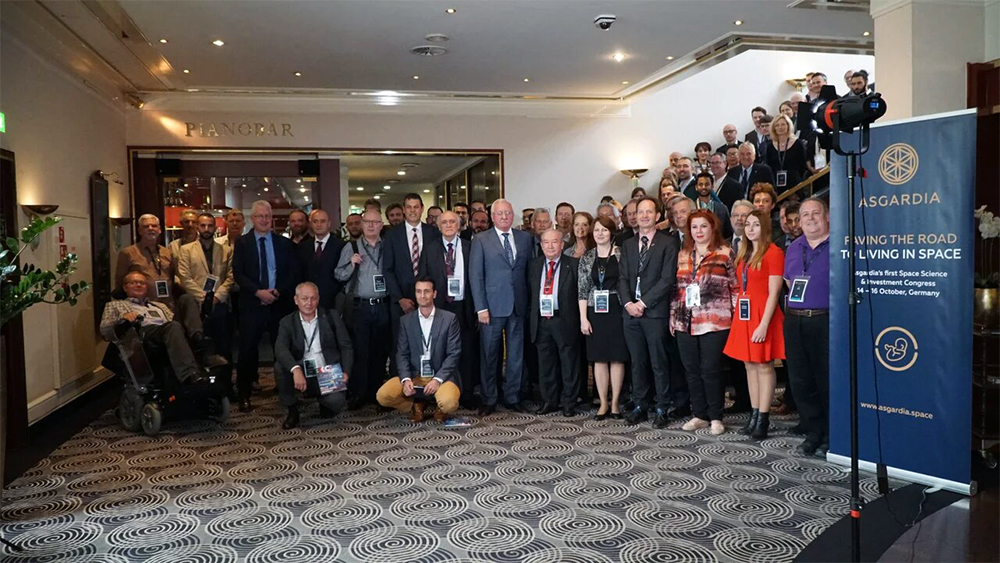 The historic First Asgardia Space Science and Investment Congress, held in Darmstadt, Germany, gathered scientists, experts, entrepreneurs, students, investors, media representatives and Asgardians to pave the road to living in space! This fascinating event lasted for 3 days, new promising approaches were suggested, problems associated with long term space missions were discussed in unprecedented detail, economical aspects of space travel were studied. Among the speakers were such extraordinary and well-known aerospace industry specialists as Laurence Young, the Apollo Program Professor in MIT’s Department of Aeronautics and Astronautics,Satoshi Iwase, Professor of the Department of Physiology at Aichi Medical University (Japan), Jeffrey Manber, CEO of Nanoracks, Frank De Winne, Belgian astronaut,  Dr. Mark Shelhamer, Former Chief Scientist of the NASA Human Research Program. The congress was a unique event that brought people from all around the world united by one dream together under the umbrella of Asgardia.

‘The population of Asgardia as of today exceeds 1 million Earthlings who reside in more than 200 countries all over the globe. Asgardia’s motto is: One humanity — one unity.

Asgardia’s main mission is the birth of the first human in space,’ said the special representative of the Head of Nation of AsgardiaRuslan Ashurbeyli. Leon Shpilsky, the Minister of Finance of Asgardia, delivered conceptual model of Asgardian economic system proposed by the Head of Nation. ‘Asgardia is the only Nation focused on networking cooperation and digital economy. It is a digital society connecting people who either already currently, or plan to in the near future, conduct their economic affairs both in the digital and non-digital formats,’ said Minister of Finance. Shpilsky presented the main Economic Principles of the First Space Nation to international officials and businessmen at Caspian Week. 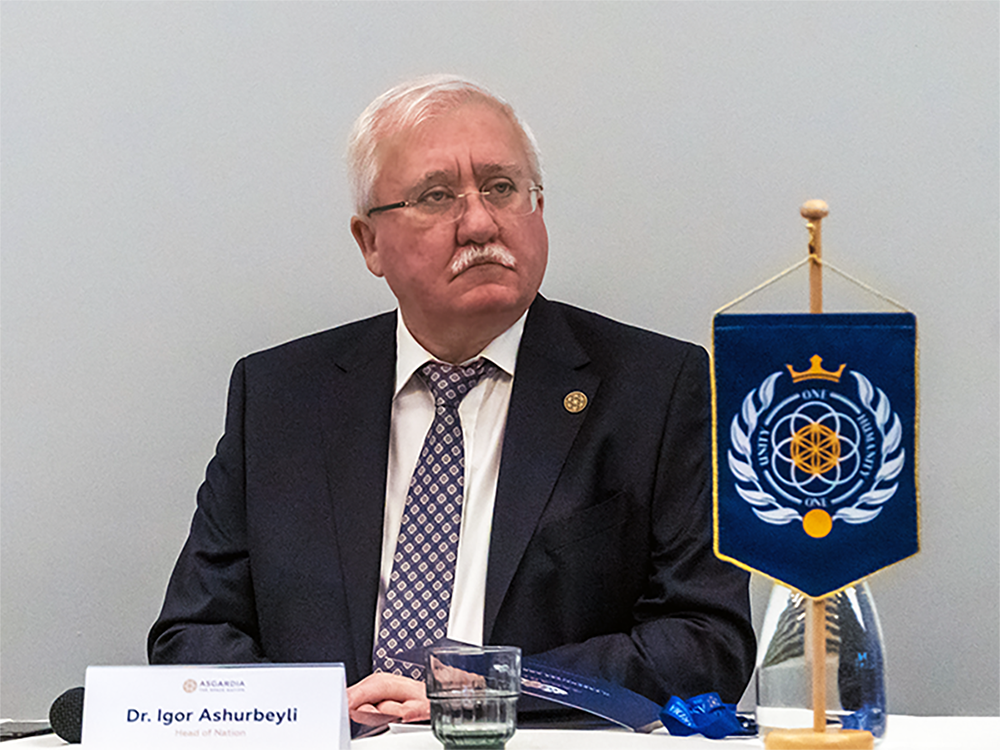 The Congress held in Tallinn, Estonia brought together members of the Asgardian Parliament, the Ministers, the Mayors and, of course, the Head of Nation. Dr Igor Ashurbeyli laid out a plan for expanding Asgardia’s representative offices and emphasized the importance of attracting new residents to the space nation: 'We can achieve a population of 1.5 million Asgardians by 2020,’ saidDr Ashurbeyli. Reaching out to new Asgardians and evolving the lawmaking process — these challenges were the most important ones that Executives face. During the Congress everyone was deeply involved in the process of legislation, Asgardia’s economy was another main topic of discussion. 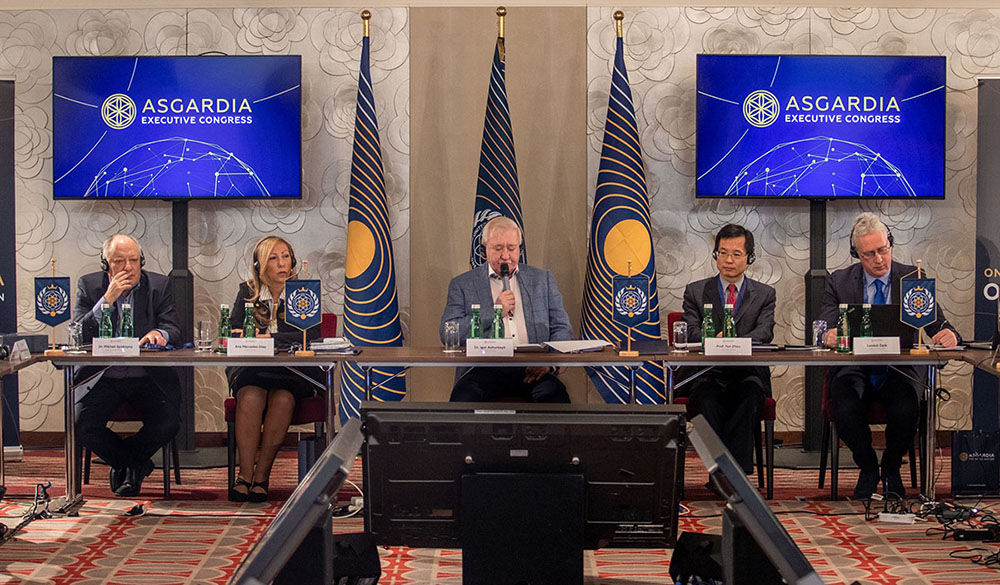 Head of Nation gave an inspiring speech about Asgardia’s main goals and the achievements of the First Space Nation at the Executive Congress in Vienna, Austria. Head of Nation announced Asgardia’s key mission — the birth of the first human in space, once accomplished, it will allow humanity to become independent of its home planet. ‘Spaceflight is very similar to seafaring, and it’s time for mankind to prepare to leave its native harbor and venture out to unknown shores’ the Head of Nation said in his inspiring speech. Dr Ashurbeyli then discussed Asgardia's population, political structure and economic development. ‘The concluding phase of Asgardia’s political construction must be full UN membership,’ saidHead of Nation. ‘Asgardia has already become a reality,’ said Dr Ashurbeyli in conclusion ‘I don’t know what awaits Asgardia down the road, but today, by the very fact that we are all here — earthlings from 10 different countries, MPs from 42 countries, and Asgardians from 200 countries — we are living proof that Asgardia is a reality. I thank all of you for believing in Asgardia. Now, let’s make sure that the spark of hope for mankind’s continued existence and procreation in the endless Universe burns bright, and never goes out.’ 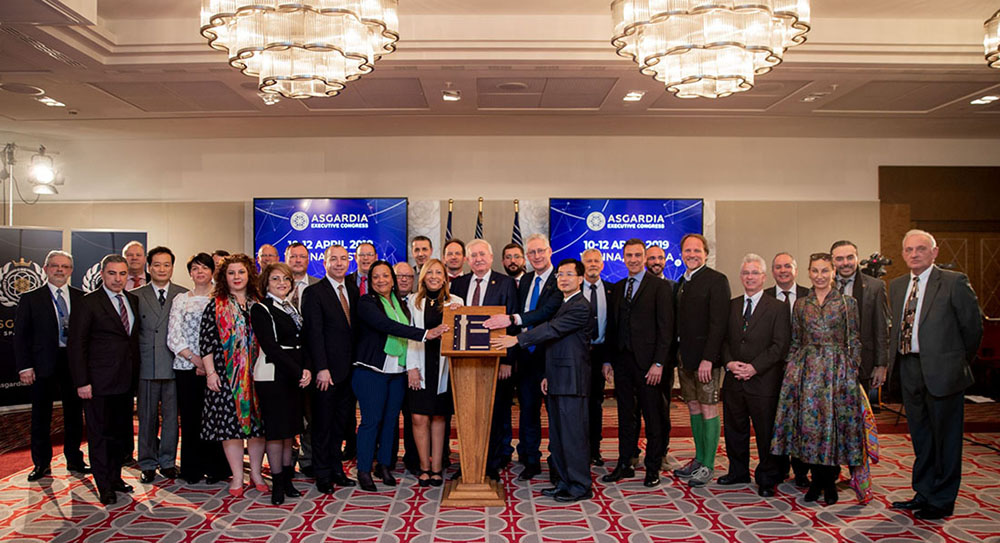 With the fully assembled government, all the Ministers and Committee Chairs were confirmed at the Asgardia Executives' Congress. Using the ceremonial Constitution, the Head of Nation conducted the swear in ceremony. Dr. Ashurbeyli read the oath together with the Parliament Chair Lembit Opik, Prime Minister Ana Mercedes Diaz, and Supreme Justice Yun Zhao: ‘We, the highest officials of Asgardia, solemnly swear to be loyal to the Space Kingdom of Asgardia, to perfectly comply with its Constitution and laws. To be devoted to our high mission, to direct all our activities for the benefit of the State and the people of Asgardia. To perform our duties responsibly, with due dedication and professionalism.' 'Yes, I swear,’ Parliamentary Committee Chairs and Government Ministers repeated three times. 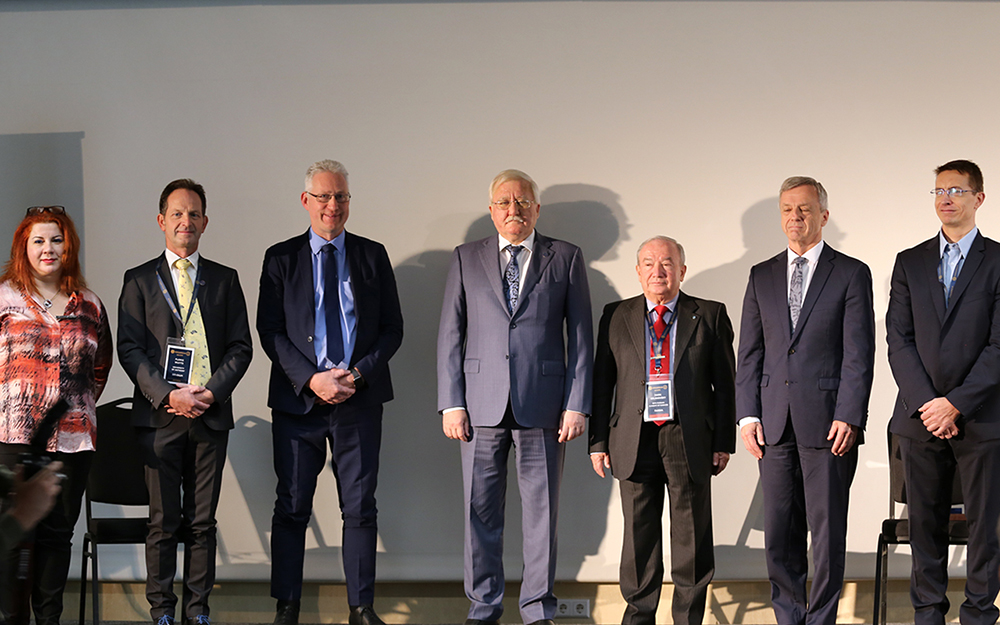 Three people were honored with the Gold Medal for Achievements in Space Exploration for the first time in history: Dr. Mark Belakovsky from Russia, Dr. Michael Gillon from Belgium and Dr. Robert Thirsk from Canada. The laureates received the awards from the hands of Head of Nation on the second day of the Asgardia’s First Space Science and Investment Congress in Darmstadt, Germany. The Gold Medal of Asgardia is a national award established to recognize extraordinary contributions to the advancement of human civilization into space. 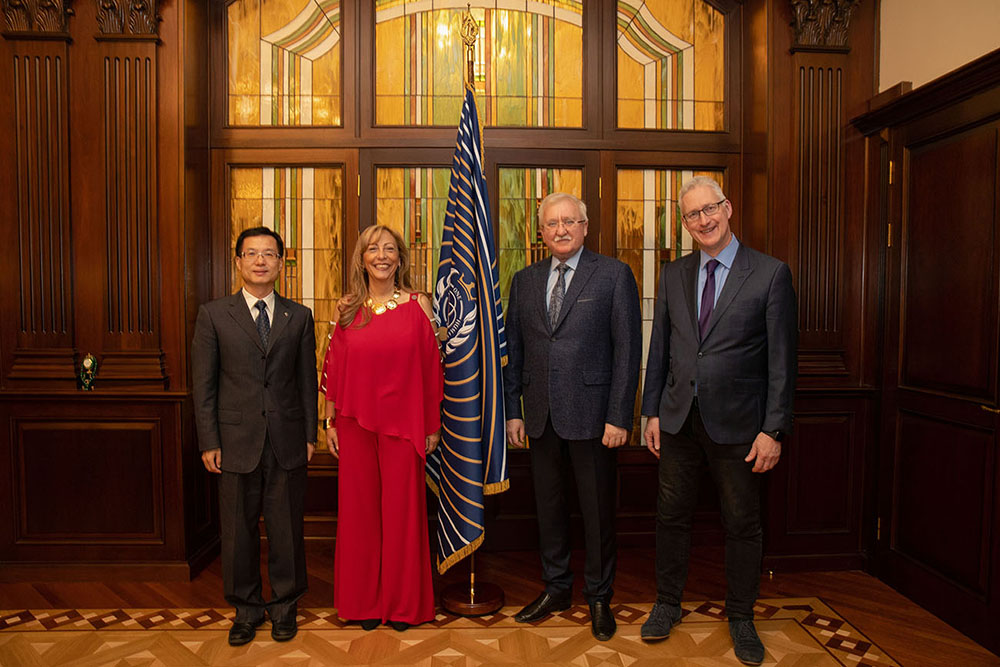 The sitting of the Supreme Space Council was attended by the Head of Nation Igor Ashurbeyli, the Chairman of Parliament Lembit Öpik, the Prime Minister Ana Mercedes Diaz, the Supreme Justice of Asgardia Yun Zhao and Executive Secretary of the sitting Dmitry Gulko. That day, a new concept of building Asgardia's population was revealed by Dr. Ashurbeyli, and next, the methodological guidelines for this work will be developed. The work of each Minister and Chairman of the Parliamentary Committee was evaluated, further steps in establishment of a judicial system were taken: a unanimous decision to create a working group in order to prepare a draft law on the judicial system of Asgardia was made during the meeting. The draft will be presented for the first reading during the February Sitting of Parliament. Relations with other countries were brought up by the Head of Nation. Dr Ashurbeyli proposed to start immediately implementing actions to establish bilateral relations with earthly countries. 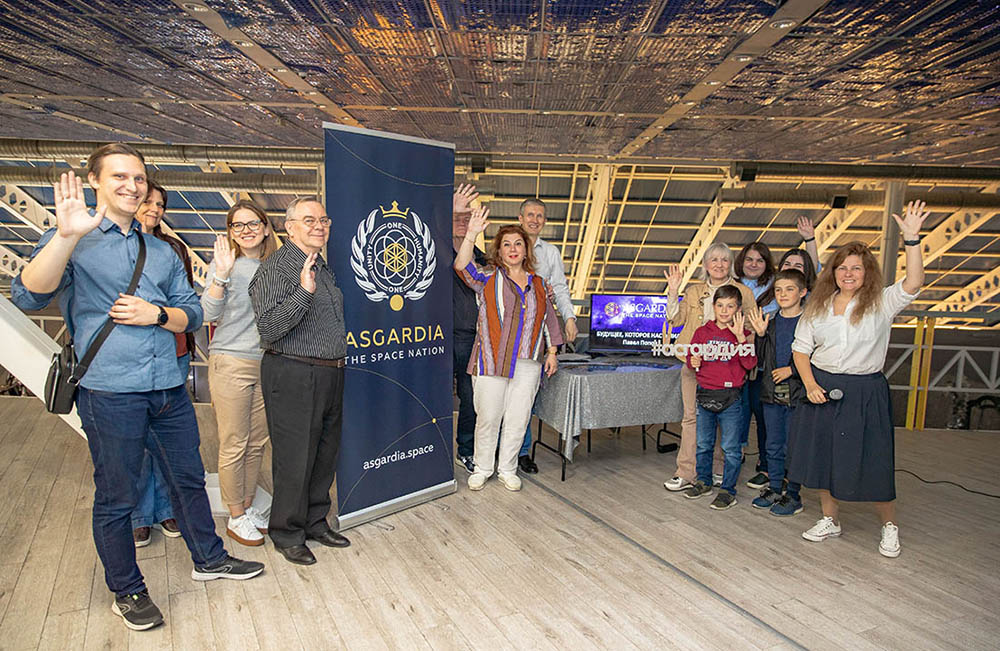 Asgardian Mayor Aksana Prutskovalaunched a new educational initiative in Moscow, a lectorium, with the help and support of Asgardia’s local team. ‘We will talk about technology, design, creativity — everything that takes the human mind beyond the ordinary. Our goal is to unite enthusiastic people from all walks of life, help them feel they’re kindred spirits, part of something big, and allow them to exchange ideas, because genius is born where differences meet. Frankly, this is what Asgardia was built for,’ said the lectorium organizer. 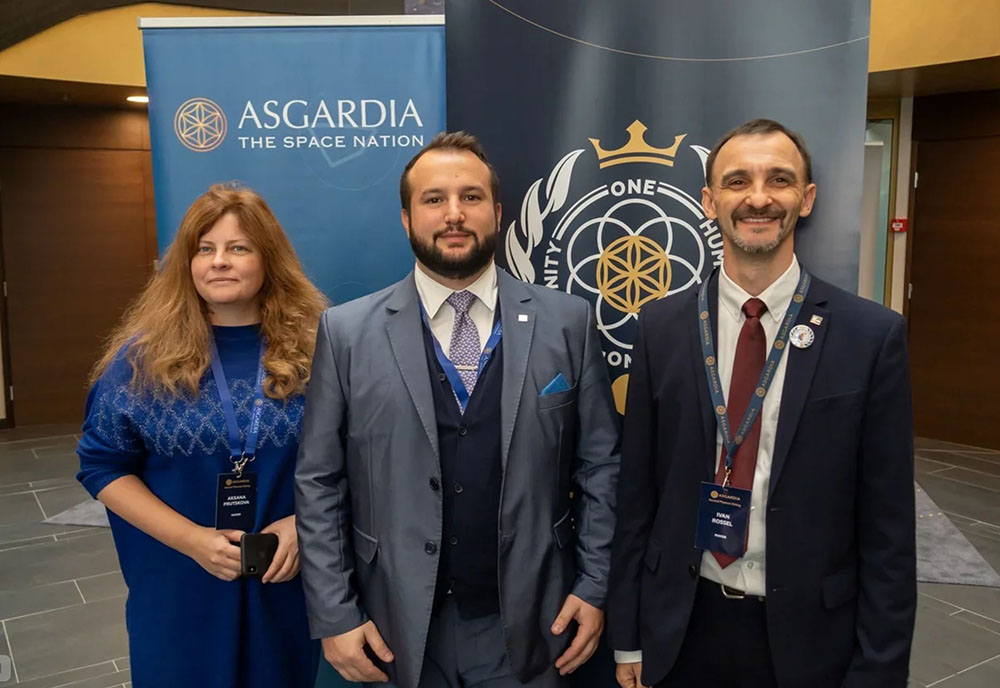 During the Second Asgardian Executives' Congress, 9 Mayors from around the globe met their Government for the first time in person. Later, Mayors held their own official meeting communicating with the ones who couldn’t attend via conference call. Mayors are the active Asgardians who build up the Space Nation, making it extremely important they have proper communication, so they can share their experiences in the development of local communities. 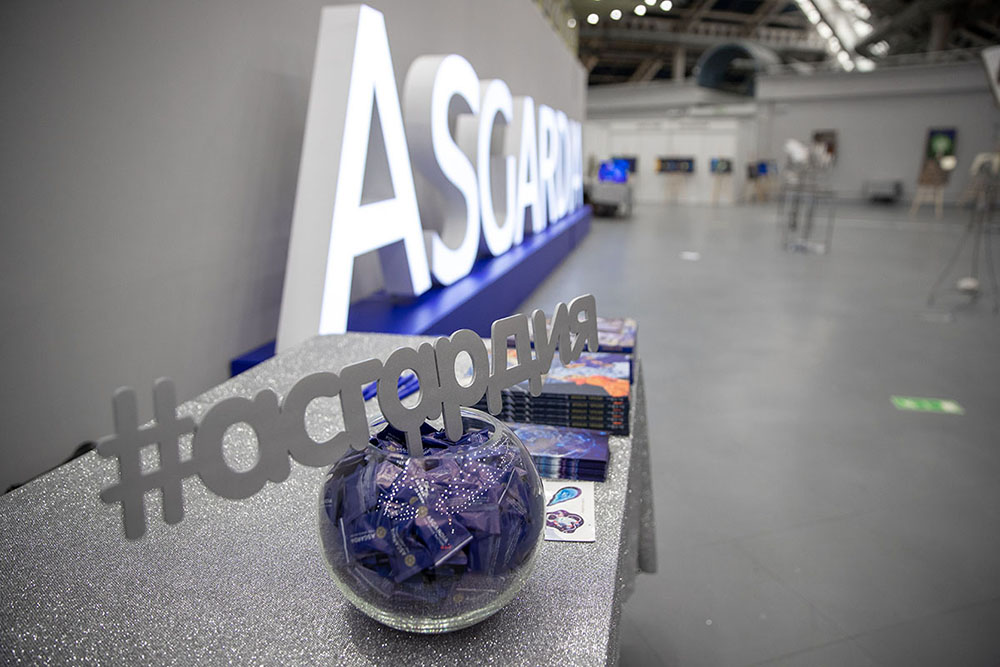 Moscow hosted an exhibit ‘In Cosmic Unity: Time and Space’ dedicated to the creation of Asgardia and the Inauguration anniversary of the Head of Nation.

The exhibition brought together talented sculptors, bold artists, Asgardians, cosmonauts and film directors. Many guests joined Asgardia, and have since then supported the mission of the First Space Nation.